“Even as a ‘small’ business, we sell a great product from a major player” 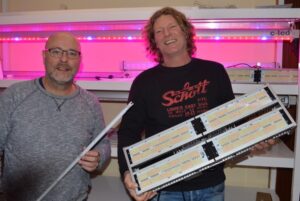 Anyone paying attention at Dutch exhibition HortiContact 2020 would have seen a Danish trolley fully fitted with LED lighting. It was at Agro-LED’s stand. This Dutch company has been selling similar systems like hotcakes ever since. “It’s an easy way for growers to do multilayer cultivation. Overseas and in customized racks too.”

So say Mark van der Ende and Roy Visser. They are the driving forces behind the company. It works closely with a major Italian lighting company, C-LED. “As a ‘small’ business, we sell products from a major player. That’s what C-LED is,” says Mark. “I was greatly impressed during my last visit to their factory. It’s in Europe. So our special LED multilayer cultivation lighting solution is a truly European product,” adds Roy.

Read the rest of the article at Hortidaily